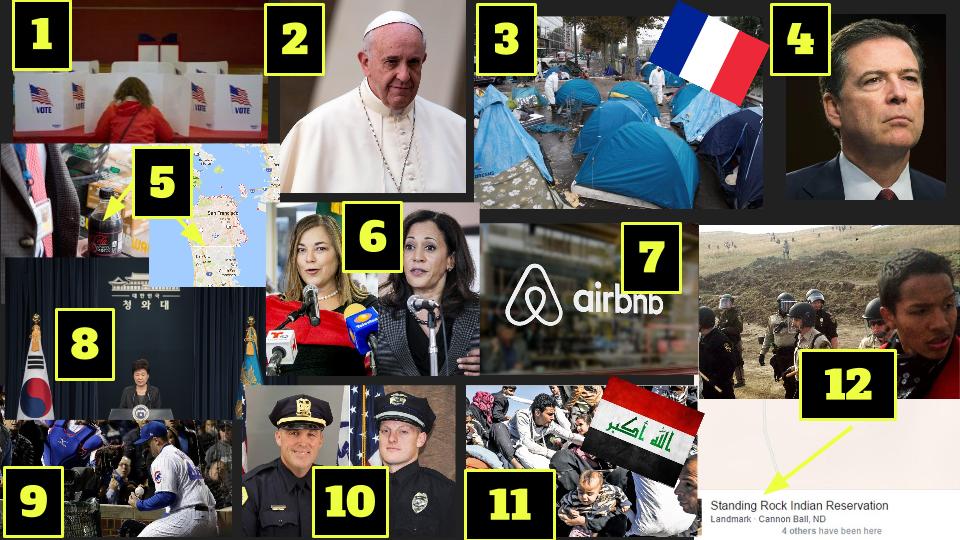 1 - People are ready to vote for the upcoming election on November 8, 2016
2 - Pope upsets women by banning them from ever being a priest.
3 - The camps of the refugees in France have been shut down by police.
4 - James Comey tries to do the "right thing". He would sometimes ignore politics while he served as a federal prosecutor.
5 - Soda companies are trying to prevent San Francisco from increasing taxes from soda.
6 - Kamala Harris and Loretta Sanchez who are both democrats race to be Senator.
7 - AIRBNB is getting sued for discrimination.
8 - The leader of South Korea accepts the blame and apologizes for her abuse of power.
9 - The Chicago Cubs makes history as they win the MLG championship by 1 point against the Cleveland Indians.
10 - A man is charged after killing two police officers.
11 - The villages of Iraq are being freed from the control of Iraq.
12 - They are at a sacred place and using rubebr bullets to prevent harm.